Get some Bling in your Toolbox!

Yes, you saw correctly, the world's best torque wrench just got some bling.

To celebrate its 95th year anniversary, Warren & Brown Precision Tools (WBPT) has released a limited edition gold chrome torque wrench. Only 250 pieces of the iconic 323500 (20-220 ft.lbs. /30-300Nm ½ drive) have been manufactured to recognize this historic achievement. Founded on precision and innovation, WBPT was originally established in 1921 as a tool-making factory in Melbourne. Over the years, many innovative tools and machinery have been developed, building the company's reputation of precision and quality.

The Deflecting Beam Torque Wrench, chosen to celebrate WBPT's 95th year anniversary, is the tool that best represents the company's history of precision, since it was designed and patented in the 1940's with the same design principals still being used to this day. With a tried and tested unique design, it has been around for over 60 years and is handed down from generation to generation. The 95th year Anniversary, 323500L Deflecting Beam Torque Wrench has a gold chrome finish, instead of the traditional silver chrome. The black arm is also engraved with a limited edition number.

This timeless torque wrench revolutionised the automotive tools market with its simple design, providing unparalleled accuracy and reliability. The Deflecting Beam Torque Wrench works by applying torque to a deflecting beam rather than a coil spring. Over time, a coil spring loses its compression and can be easily damaged if left under load for long periods of time. The re-calibration and repair costs for these types of wrenches can be quite high throughout the life of the wrench. On the other hand, the Deflecting Beam torque wrench has no wearing parts and the unique design ensures accuracy of +/- 2% throughout the range of the wrench.

The all steel construction ensures supreme durability and reliability in the harsh environments it is expected to operate in. The torque setting can be easily selected via a sliding scale which displays the torque units in ft.lbs, Nm and kg-cm. As force is applied, the beam begins to flex and as soon it reaches the selected torque setting, it engages the signaling mechanism which notifies the user that the setting has been reached. The dual signal feature allows the user to see and hear when the selected torque has been reached. The Warren and Brown Deflecting Beam Torque Wrench is proudly made in Australia, including its limited golden edition. As well as the limited edition torque wrench, WBPT has a full range of deflecting beam and other style torque wrenches to suit any application, great or small. 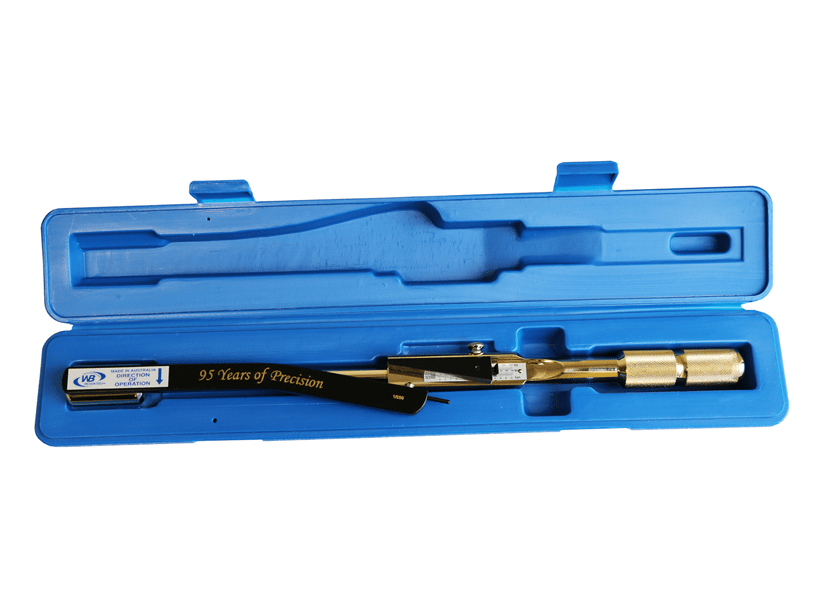 Note: Available at your nearest distributor from 22/08/2016.    https://wbtools.com.au/distributors